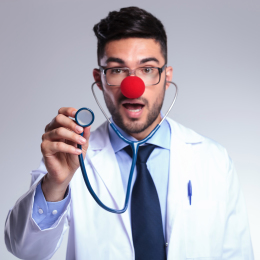 As we prepare to ring in 2015, the latest op-ed by CAS’s Dr. Joseph Perrone takes a look at some of the flawed research that was widely reported as fact in 2014. You can read the piece, which ran in the Las Vegas Review-Journal, here.

By DR. JOSEPH PERRONE
SPECIAL TO THE LAS VEGAS REVIEW-JOURNAL

Science has come a long way from the days when we believed the universe revolved around the Earth, lobotomies were the best treatment for depression and germs didn’t exist. But while you probably won’t read any studies of alchemy or bloodletting in respected scientific journals, it doesn’t mean the days of publishing inaccurate and misleading research are behind us. In fact, 2014 was a banner year for the promotion of some pretty dubious and downright silly research.

As we prepare to ring in 2015, let’s take a look at some of the flawed research that was widely reported as fact in 2014.

Do people take female-named hurricanes less seriously than those with male names? According to a study published this summer in the Proceedings of the National Academy of Sciences, the answer is yes — and they claim that storms with female names are deadlier. Looking at the actual data in the study, however, the answer is probably not.

The study’s authors argue people don’t take the same precautions to prepare for a female-named storm, and therefore female-named storms kill more people. Yet the study’s researchers didn’t consider the fact that from 1950 to 1979, all hurricanes were given female names. That skews the data significantly, considering that on average, hurricanes kill far fewer people now than they did in previous decades. When you look only at storms from 1979 to the present, there’s no correlation between the storms’ names and fatalities.

The National Academy of Sciences isn’t the only well-respected organization to be taken in by flawed research. The American Heart Association — an organization known for its revered cardiac research — published a study claiming that drinking from cans (and thereby ingesting a chemical used in the lining of cans, Bisphenol A or BPA) could raise your blood pressure and increase your risk for heart disease.

It’s a pretty scary idea — just drinking a canned beverage could increase your risk for a heart attack. But once again, the actual data doesn’t support the authors’ sweeping conclusions. When you look at the data in the study, participants’ blood pressure didn’t actually rise after drinking from a can.

At most, you could say this small study (only 70 participants, all over age 60) found that drinking soy milk out of a can might temporarily lower your blood pressure slightly less than drinking it out of a glass bottle. It certainly doesn’t show that drinking any beverage from a can might increase your risk of cardiovascular disease.

But while both of these studies from respected journals have serious issues and were blown out of proportion in an explosion of news stories, their flaws pale in comparison to a study released by an anti-vaccination group in the United Kingdom.

Its claim? That vaccinations can turn your child gay.

It’s pretty generous to call the group’s ridiculous conclusion a “study.” To “prove” its assertion, the group’s website links to a 13-year-old study of hormone levels and sexual preference — a study that has absolutely nothing to do with vaccinations.

Of course, facts and statistics have never gotten in the way of the anti-vaccination movement. Its members are still citing a retracted and widely discredited paper linking vaccines and autism as “proof” of why we shouldn’t vaccinate our children.

Perhaps for 2015, our resolution should be to view new scientific studies with a bit more skepticism and take the time to look at the actual data before jumping to conclusions.

Dr. Joseph Perrone is the chief science officer at the Center for Accountability in Science, a project of the nonprofit Center for Organizational Research and Education.