No, the FDA isn’t Poisoning Baby Food with Rocket Fuel 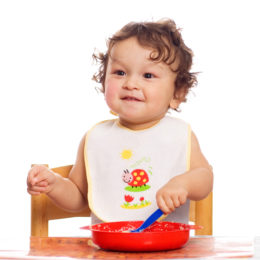 Last week, activists with the Environmental Working Group, Natural Resources Defense Council, and Environmental Defense Fund (among others) tried to stir public fear to fit their narrative. This time, they claimed that the Food and Drug Administration (FDA) refused to ban the use of rocket fuel chemicals in baby food. (How dare they! Think of the children!)

But, as you might imagine, reality is far less dire than what these activists crying wolf would like you to believe.

Perchlorate, the chemical which activists want banned, is a naturally occurring molecule made up of one chlorine atom and four oxygen atoms. It’s used to reduce static electricity buildup in dry food packaging.

Since the molecule contains so many oxygen atoms, it’s also useful in maintaining fire. Remember, fire needs three ingredients to start: a heat source, fuel, and oxygen. Although perchlorate is used to supply oxygen in fireworks and rocket fuel, the substance by itself isn’t inherently dangerous.

The long-standing principle in toxicology is that the dose makes the poison. Any substance, including water or caffeine, can be toxic in a great enough amount. That’s why perchlorate in food packaging is already heavily monitored by the FDA and EPA.

The National Academy of Sciences recommends that people, including sensitive groups like pregnant women and infants, consume no more than .7 micrograms per kilogram of body weight per day.

That’s pretty tiny—the average baby, weighing 3.5kg (about 7.7 lbs), shouldn’t consume more than the equivalent of about 1/25 a grain of salt. And rather than basing this level on how much perchlorate could cause a health problem, the NAS measurement is even more conservative. Their analysis reflects how much perchlorate it would take to before impacting the body’s absorption of iodine.

Iodine helps the thyroid make hormones, and perchlorate was previously prescribed to help people with an overactive thyroid.

In a recent study, which examined real-world exposure to perchlorate, the FDA found that levels didn’t even come close to the safety threshold. Even in infants, who tend to eat a lot of dry packaged cereal, perchlorate levels never reached more than half the recommended level.

That is why FDA decided that an all-out ban on perchlorate would be unnecessary. After all, perchlorate serves a useful purpose, and people don’t consume enough to raise concern.

We’ll chalk up this toxicological review as FDA: 1, fear-mongering activists: 0.