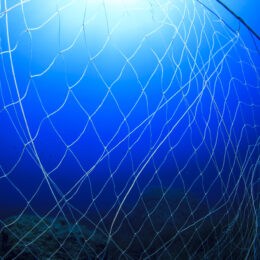 You don’t need to completely “deep-fake” a photo to deceive people. Just look at the latest from Oceana, an environmental activist group.

The organization released a report on November 19 titled: “Choked, Strangled, Drowned: The Plastics Crisis Unfolding In Our Oceans.” The document and a related YouTube video mention the United States dozens of times and are focused exclusively on marine life that is killed in U.S. waters, allegedly because they consumed plastic waste.

Yet Oceana used photographs of trashed beaches on the other side of the globe—even though the U.S. is not comparable to, for example, Malaysia. Oceana even went as far as using a composite image on the front cover made to look like a seal was choking on a plastic bottle.

“Correction: Nov. 19, 2020. An earlier version of this article published in error a photo of a Hawaiian monk seal with a plastic bottle in its jaws. The caption information for the image, from a stock photo service, did not make clear that it was a composite photo illustration; it was not a photo of an actual scene,” the Times wrote in an updated version of their report.

While the New York Times moved quickly to correct their coverage, Oceana did not. It released an updated version of their report on November 25 — after roughly a week of misleading the public — without mentioning the changes it had made in the report.

Oceana, like the New York Times, changed the photograph to a photo from the Midway Atoll in the Pacific, near Hawaii.

But catch this: In the Times’ photo, the foreign characters can be spotted on the trash, a reflection of the fact that almost all of the plastic in the ocean can be traced back to Asian countries that don’t manage waste well.

Oceana — for some reason — did not choose a photograph that could be used to identify the source of the plastic in the Pacific. Oceana’s photo from the Midway Atoll just shows bottles and plastic that could be from anywhere. This decision aligned with their other misleading photo selections that aimed to tie Americans to the mismanaged waste in the oceans, not other countries.

The Oceana report mentions the U.S. dozens of times and does not contain the word “China” once. It doesn’t mention Thailand, Philippines, Vietnam, Sri Lanka, or Indonesia, either, despite those countries being the top ocean polluters according to a 2015 study.

As usual for environmentalists with a lobbying agenda, Oceana exaggerates legitimate problems. For instance, the report claims that sea turtles near the U.S. were “struggling.” However, a peer-reviewed study published by the academic journal PLOS ONE, 78 percent of marine mammals and 75 percent of sea turtles increased their population size under the Endangered Species Act. (Of the populations that significantly increased, 50 percent were listed as endangered species and 33 percent as threatened.)

Certainly, no one wants to see sea life harmed by trash, whether plastic, metal, cement, glass, or other materials. But Oceana’s lobbying agenda to restrict or ban plastic consumer products in the U.S. looks pretty silly if you are aware that we are not creating the problem in the first place, but rather other countries are.

Of course, you have to be aware of that fact first. And it is clear to us from the bait-and-switch tactics that Oceana hopes you aren’t.