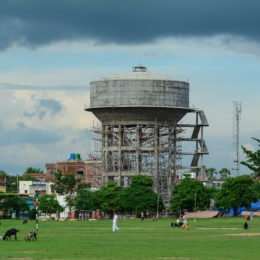 “Raw” or “live” water has the potential to be the “natural” movement’s most deadly trend. Its appeal is everything you’d expect to read on a sign warning against swimming in polluted waters: Unfiltered, untreated, and unsterilized. Although the raw water movement received swift criticism from comedians and academics alike, it doesn’t seem to have stemmed the flow (pun intended) of interest. Jugs have sold for as much as $60 in the Bay Area.

One of the primary drivers of the raw water movement is the irrational fear of chemicals added to municipal water systems. Chief among the concern is chlorine, which is used to kill microorganisms like bacteria, fungus, and parasites and prevent them from growing in water as it moves through the pipes to your home or office. The U.S. Centers for Disease Control and Prevention notes that chlorine levels up to 4 milligrams per liter are safe in drinking water. Unsurprisingly, the EPA regulates the amount of chlorine in drinking water to ensure there isn’t too much (nor too little). Flint, Michigan, offers a great example of what happens when public drinking water doesn’t contain enough chlorine.

An outbreak of Legionnaires disease killed 12 people and sickened close to 100 after the city switched its water source to the Flint River. Legionnaires disease is a severe type of pneumonia that spreads through contaminated water sources. The bacterium responsible, Legionella pneumophila, can enter the lungs when droplets are inhaled – like mist keeping an amusement park cool, or when a thirsty consumer chokes on their untreated water.

In Flint, the lead and other heavy metals that put residents at risk also reacted with chlorine in the water, making less of the disinfectant available to kill microbes. Less chlorine meant bacteria in the water’s source could grow freely – just like it does in untreated water.

Even if Flint had received its water straight from the source, bypassing corroded lead pipes, the city wouldn’t have been spared exposure to Legionella (or coliform bacteria, which indicate that E. coli or other disease-causing organisms may also be present. Flint tested positive for fecal and total coliform bacteria twice during the crisis).

Outside of Flint, most of the nation enjoys access to clean water and shouldn’t be concerned by what comes out of their tap. If anything, the raw water movement makes a mockery of human suffering for those who don’t have access to safe water like we do in the US. Even if the “raw water” movement is short-lived, the pseudoscientific beliefs that support it aren’t.