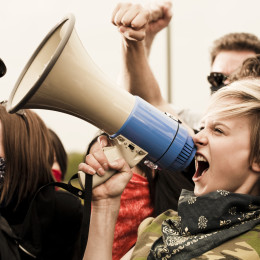 Scientists recently gathered at a conference in Europe to discuss the challenges of food security and sustainability in the 21st century. But not long after the lectures began, activists burst in and made a big stink about biotechnology.

Had they been scientifically minded, they would’ve brought arguments based on evidence. Instead, they doused audience members in urine, threw rotten eggs, and dumped cow manure on the lecture hall floor.

That’s one way to make a statement. Albeit not a very respectable or rational one. Thousands of studies and the world’s major scientific bodies have concluded, based on peer-reviewed, empirical findings, GMOs are safe. It’s a fact which flinging dung can’t change.

Especially if you’re flinging it at the wrong people. The conference was focused on saving water while feeding more people, while only a few of the over 300 contributions even dealt with GMOs (which, again, are safe). The irony is activists claim they’re making the world better, then throw urine on the scientists trying to feed it

Of course, we can’t expect much self-awareness from people who think throwing fecal matter is a civilized form of discourse. Such vulgar tactics prove the willingness of certain activists to put their emotions above objective evidence. In other words, they reject science.

Such activism may be a drag on scientific progress, but at least it gives a good lesson: Without science as our respected authority, debates are going to get messy.