Are there ‘Worrisome’ Ingredients in Sunscreens? 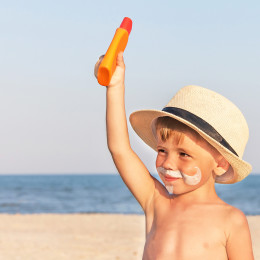 Memorial Day is just around the corner, which for many Americans signals the opening of swimming pools and the beginning of beach vacations. For the Environmental Working Group (EWG), it’s the opportunity to release its scary annual report about the “danger” posed by most sunscreens on the market.

This year, EWG’s splashy new finding is that “80 percent of 1,700 products we examined this year offer inferior sun protection or contain worrisome ingredients like oxybenzone and vitamin A.” To steer consumers to “less harmful” products, EWG provides a list of its “best sunscreens and moisturizers” with handy links to purchase these products directly on Amazon.

But the ingredients EWG is so worked up over (and used in many of the most popular sunscreen brands) don’t actually pose a risk to our health.

EWG gives the lowest rankings on its lists to sunscreens that contain oxybenzone and/or retinyl palmitate (a form of vitamin A), but EWG’s criticism of these ingredients is far out of step with the scientific and medical community.

EWG’s other main criticism of sunscreens is that many brands make claims about extremely high SPF levels—a problem that the U.S. Food and Drug Administration has recently taken important steps to address. The FDA has proposed a regulation that would limit the maximum SPF value on sunscreen labeling to “SPF 50+.” Evidence suggests that sunscreens with higher SPFs than 50 don’t necessarily protect consumers much more.

For 9 years EWG has been whipping up a media frenzy and scaring consumers about sunscreen safety.  The truth, however, is that you don’t need to shell out $30 or more for 2 ounces of EWG-approved “natural” sunscreen to protect yourself from the sun. But you should keep in mind that sunscreen only works if you consistently reapply coverage.

For better guidance about when to use sunscreen and how to protect yourself from skin damage, you can view the American Academy of Dermatology’s Sunscreen FAQs here.