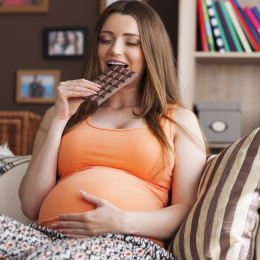 We all know the stereotypes: Women love chocolate, and pregnant women have a special affinity for sweets. To the joy of pregnant women everywhere, the Society for Maternal Fetal Medicine issued a press release last week suggesting that researchers have discovered eating chocolate during pregnancy might actually have important health benefits for moms-to-be. Unfortunately, a closer read reveals the headline “the benefits of chocolate during pregnancy” is too good to be true.

The press release touts the release of a study at the society’s annual pregnancy meeting, “High-flavanol chocolate to improve placental function and to decrease the risk of preeclampsia: a double blind randomized clinical trial.” Preeclampsia is a serious pregnancy complication in which women develop high blood pressure and often serious swelling late in pregnancy. Undiagnosed and unmanaged preeclampsia puts mothers and babies at serious risk—thus any new scientific discoveries reducing that risk are important.

The study is also preliminary. It hasn’t been peer-reviewed or published in a journal. As usual, none of these issues stopped news outlets from publishing stories, “Chocolate is GOOD for pregnant women: Doctors say it has a ‘positive impact on placenta and fetal growth‘,” “Why pregnant women should eat more chocolate,” and “Researchers reveal benefit of chocolate consumption during pregnancy.”

Of course, there’s no reason why women shouldn’t enjoy chocolate during pregnancy (unless they’ve been diagnosed with gestational diabetes). But there’s simply not enough evidence to show chocolate consumption reduces their risk of developing serious pregnancy complications.