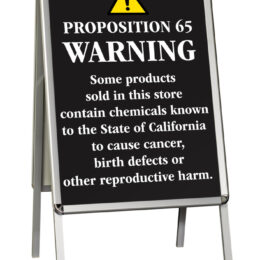 A PETA-linked group touting vegan diets issued a complaint with the state of California requesting that processed meats–things like sausage and bacon–be saddled with a Proposition 65 warning.

Prop 65 warnings are burdensome regulations that require anyone selling goods within the state of California to disclose any possible carcinogens that may be present in the product — no matter how scant the amount. The warnings became law following a ballot initiative in 1986 to protect consumers from toxic water but they quickly became a tool for trial lawyers and activists to harm businesses. The list of toxic substances rapidly expanded to include more than 900 chemicals.

These costly regulations kill jobs–which is exactly why the fake meat industry is hoping to weaponize Prop 65 against real meat.

The so-called ”Physicians Committee” for Responsible Medicine (PCRM), a vegan advocacy group whose membership is only 10% actual physicians, first filed the Prop 65 complaint five years ago. PCRM said that processed meat should be included on the state Office of Environmental Health Hazard Assessment’s (OEHHA) list of possible carcinogens, even though only individual chemicals are included on the list.

OEHHA ignored PCRM’s complaint because processed meats, including bacon and other deli meats, are made up of several ingredients. They are not one chemical. The head of OEHHA told the group that a Prop 65 warning on processed meats would “result in an over-inclusive warning.” (Small businesses would say a lot of these warnings are over-inclusive–but at least the bureaucrats draw the line somewhere.)

Plantcraft USA, a fake meat company, joined in on PCRM’s effort. Plantcraft’s director of marketing, Jonny Hochschild, wrote a letter to Gov. Gavin Newsom urging the governor to intervene and mandate that OEHHA respond to the complaints filed by PCRM. Hochschild said his company’s plant-based products were “unfairly harmed” by Prop 65 warnings because real meat products do not carry a Prop 65 warning.

Hochschild didn’t mention that most faux meats are riddled with questionable ingredients compared to real meat which just contains … real meat, and perhaps some seasonings.

The North American Meat Institute made this argument clear, arguing that a Prop 65 warning for meat “defies both common sense and numerous studies showing no correlation between meat and cancer.”

Ultimately, Plantcraft and PCRM stuck with the complaint and managed to get the Superior Court of California to require OEHHA to respond to the complaint, despite processed meats not being a single chemical.

So now, OEHHA will decide whether to burden any processed meat — including something as simple as hamburger prepared only with table salt — with a Prop 65 warning.

There is a reason Prop 65 has been referred to as “legalized blackmail.” The terrible regulation has been weaponized against businesses of all sizes. This latest ploy by the fake meat industry is no different. They want their goop-filled patties to be on a level playing field with real meat and they’re using Prop 65 to make a false equivalency between their hyper-processed foods and natural meat.

Weaponized Prop 65 warnings have been multiplying in recent years. In 2019, there were 534 notices filed for alleged Prop 65 violations. In 2020, there were 1,546 notices filed. And given the chemicals that form when some fake meat products are cooked, they should be careful what they wish for.

To meet some of the business owners harmed by Prop 65, please visit our YouTube channel.