Fishing for Facts About Ocean Plastic 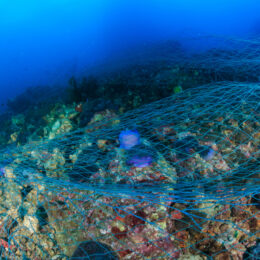 Seaspiracy reveals that the real culprit is abandoned fishing gear, also known as “ghost gear.” That may come as a surprise to environmentalists who have pushed for bans on single-use items in more than 25 states, all in the name of protecting the oceans.

The filmmakers pointed to the Great Pacific Garbage Patch, a zone in the central North Pacific spanning 1.6 million square kilometers—nearly double the size of Texas and triple the size of France—where currents create garbage accumulation. Often portrayed as an area full of plastic bottles and cutlery, Seaspiracy tells another story.

According to a journalist in the film, citing a 2018 study, abandoned fishing gear is responsible for 46 percent of plastic floating in the patch.

George Leonard, chief scientist for Ocean Conservancy, says, “At least half of [ocean plastic waste] is not consumer plastics, which are central to much of the current debate, but fishing gear.” Those plastic straws? They’re only about 0.03% of ocean trash.

Other studies have found that more than 640,000 tonnes of fishing nets, lines, and traps are dumped into the sea every year—equivalent to the weight of 55,000 double-decker buses. Several groups have labeled ghost gear the biggest plastic polluter in the ocean, and the biggest threat to marine life.

The same research finding that 46% of the Great Pacific Garbage Patch is fishing gear also reveals another important point: Most trash recovered came from Asia. Research has estimated that almost all plastic that enters the ocean from rivers (a major source) comes from just 10 rivers—eight in Asia and two in Africa. Moreover, the U.S. properly manages about 98% of its waste, according to one study. In other countries, particularly in Asia, the figure is more like 10%.

These countries have littered landscapes and poor infrastructure which allows plastic to pour into their waters. Currents then drag it thousands of miles away in Hawaii.

Meanwhile, much of the plastic in the ocean is actually in the form of microparticles, not large pieces of plastic. The single largest source of microparticles is believed to be our clothing—specifically, synthetic fibers such as nylon. These synthetic textiles leach microfibers when they are put in the wash. Over time, these tiny particles travel from our local water supply to the ocean.

Banning consumer items will only have a minimal effect on ocean trash. Bans on bags and straws may be still worth doing because they are not easily recyclable and they have readily available non-plastic alternatives. They are relatively trivial items. But access should be insured for other single-use plastic products, with important health and safety usage, including masks, gloves and water bottles.

The National Oceanic and Atmospheric Administration helped develop a cost-free program for unusable fishing gear that is in our waterways. The program has collected more than 4 million pounds of gear from 56 locations across the United States. But we’re not the only country that fishes.

Environmentalists need a sea change in their approach. If they want to clean up the oceans, they should help other countries improve their waste handling.