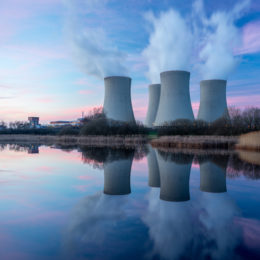 The United States and Poland reached an $18 billion nuclear energy deal that will reduce Poland’s dependence on Russia.

U.S. officials agreed that American companies will supply Poland with nuclear technology which will allow them to transition away from the natural gas they have been sourcing from Russia. Polish officials said that the deal will help them halt all purchases of natural gas from Russia by 2022. This decision follows several contentious spats between Polish and Russian officials.

Polish and American officials will spend the next 18 months developing a nuclear energy program that includes six reactors, according to the U.S. Department of Energy. The first reactor is slated to be up and running in 2033 and could be worth $40 billion. In the meantime, Poland will receive natural gas from Norway via pipelines and liquid natural gas from the U.S. allowing Polish officials to meet their 2022 deadline of energy independence from Russia.

U.S. Secretary of Energy Dan Brouillette said that the transition to nuclear power will not only bolster Poland’s national security but it will provide clean energy in line with Poland’s goal of reducing greenhouse gas emissions.

“Nuclear will provide a clean and reliable supply of electricity to the people of Poland, as well as enhance their energy diversity and security. The next generation of nuclear energy must be a part of the energy security conversation with our allies in Europe and around the world,” Brouillette said.

Georgette Mosbacher, the U.S. ambassador to Poland, also noted that the deal strengthens the American nuclear energy sector, as well. Mosbacher hoped that the deal will inspire others throughout the world

“This agreement marks several major milestones, not only does it strengthen Polish-American relations, but it is an announcement to the rest of the world that America is back in the nuclear business, thanks to U.S. cutting edge technology,” Mosbacher said. “Nuclear energy has never been safer, more affordable, or more flexible.  We are ready to help our partners achieve energy security while cleaning up the environment by providing both technology and financing.”

National security experts and environmentalists alike are recognizing the benefits of nuclear energy. Not every corner of the globe has the luxury of sitting atop oil or natural gas reserves. Nuclear energy allows every country the ability to power themselves and scale back its reliance on hostile neighbors.

Many countries are drawn to nuclear energy because it is clean, reliable, and safe. This recent deal between the U.S. and Poland has proven that nuclear energy is also an effective tool for small nations who are trying to get out from under the thumb of their oil-rich adversaries.