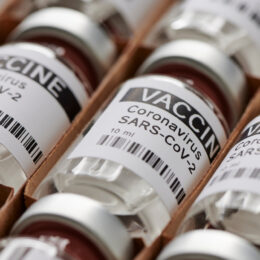 While most of the world celebrated the announcement of Pfizer’s COVID-19 vaccine, not all were pleased. The movement against genetically modified crops fumed because the vaccine was developed using genetic modification technology.

The long-awaited coronavirus vaccines developed by Pfizer and Moderna both use messenger RNA, a form of genetic material, to create a decoy protein that the immune system attacks, creating antibodies that can fend off future SARs-COV-2 infections. Both vaccines have been found to be highly effective and they have moved onto their final rounds of authorization in the United States. The Pfizer vaccine is already being implemented in the United Kingdom.

This is fantastic news, unless you’re a member of the anti-science, anti-GMO movement.

Supporters of the anti-GMO (genetically modified organism) movement oppose the use of genetic modification in any form. While the conversation around GMOs is typically centered around the use of modified foods, the use of mRNA in the vaccines has anti-GMO believers back on their soapboxes.

A recent survey conducted by the Boston Globe revealed that 29 percent of respondents did not plan on taking the vaccine immediately. Among those who vowed not to take the vaccine were anti-GMO advocates.

“Not an anti-vaxxer, concerned that this new type of shot has been rushed and we still don’t know the long-term effects on humans using a new mRNA shot. If it was a traditional shot and not mRNA or DNA I would take it. Also, mRNA has ‘proprietary’ elements in the shot that I will not accept into my body, no GMO (genetically modified organisms) for myself and kids. I do not eat GMO food either,” said a Boston man named Dave.

In a similar story, Agartha Franklin, a reader of the New Hampshire-based Conway Daily Sun, submitted a letter explaining that she too would not take the vaccine because it was developed using gene-editing technology.

“Never. No way. No how. Keep your warp speed GMO never before used vaccine with untold long-term side effects and nowhere-near-enough science behind it to suggest the efficacy. Two hundred people is not a sample size large enough to be statistically relevant. I cannot believe all the people willing and ready and wanting to take this vaccine,” Franklin said.

In other words, the anti-GMO movement will refuse to take the vaccine because they don’t like the idea of genetic modification, even if scientists around the globe have confirmed the safety of the vaccine. This is the same song-and-dance the anti-GMO movement has done when it comes to consuming modified foods that have been proven safe for decades.

Experts have already warned that anti-GMO sentiments could cause global famine. Now, the anti-GMO movement threatens to prolong the pandemic–and risk the personal safety of its believers–because of the distrust of science it creates.