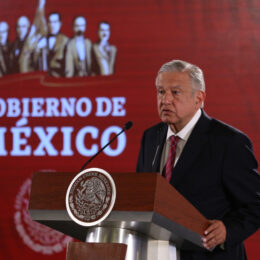 Obrador announced the ban on modified corn late last year. Modified crops are more resistant to pests, produce higher yields, and take up less land. There is zero credible evidence that modified crops are dangerous to consume, yet anti-GMO conspiracy theorists have demonized them as hazardous. In the same announcement, Lopez Obrador also banned the use of glyphosate, a pesticide that has been deemed safe by the United States Environmental Protection Agency for years.

The National Farm Council of Mexico filed a lawsuit to attempt to stop the ban from being implemented. The council called Lopez Obrador’s ban “radical and unscientific,” but the judge ruled in favor of the president. According to the council, the ban could lead to 30 percent lower corn yields in Mexico.

Those lower yields spell big trouble for tortilla-loving Americans and Mexicans alike. The council warned that the ban will lead to higher prices for consumers in both countries. But this could also cause problems for American farmers.

An estimated 90 percent of U.S. corn exports are genetically engineered. The U.S. exports roughly 16 million tons of corn each year to Mexico meaning that American farmers will either need to switch to non-modified corn or find a new market for their sales.

The opposition to engineered crops is not based on science, but it will have lasting effects on the food chain and the nutritional health of those impacted by the decisions. One report from Real Clear Markets estimated that at least 500,000 children have gone blind because some Asian countries under the guidance of the United Nations have outlawed modified crops. If these countries were allowed to grow “golden rice,” a vitamin A enriched rice, these children would not have suffered blinding vitamin A deficiency.

American officials have warned that opposition to modified crops could lead to famine for future generations.

Two researchers from the Heritage Institute, a right-of-center think tank, urged President Joe Biden to intervene in Lopez Obrador’s decision because it may run counter to some of the provisions of the USMCA, the latest trade agreement between the United States, Mexico, and Canada.

The USMCA was negotiated under the last administration and it is aimed at bringing trade between the three countries into the 21st century. Needless to say, banning crops that have been improved by cutting-edge engineering is anything but progressive and modern.

Unless the Biden administration intervenes, Lopez Obrador’s ban on modified corn and glyphosate will take effect in 2024.