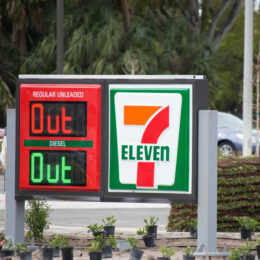 Half of the East Coast’s gasoline and jet fuel supply is at a standstill after a malware attack forced the shutdown of Colonial Pipelines.

Colonial Pipelines, a private firm that supplies gasoline to most of the cities from the Gulf Coast to Boston, was targeted by the Russian hacking group DarkSide. According to the FBI, DarkSide intended to only freeze Colonial’s data as part of an extortion scheme, but it ended up cutting off the East Coast’s oil supply in the process. The hack was aimed at the office end of Colonial’s operation, not the control systems of the pipeline. Still, the hack propelled Colonial to shut down its full operation to prevent further damage.

Colonial’s shutdown began on Friday and the gasoline shortages are just starting to hit the East Coast. Social media users uploaded scenes of long lines and empty gas pumps throughout the region.

I’ve visited five gas stations this morning and the Costco one is the first to have gas.

The line is insane. pic.twitter.com/fMfuIMNlJ7

The Colonial Pipeline was built in 1963. Like many aspects of the U.S. infrastructure system, including the roads, bridges, and tap water system, several American pipelines that are essential for providing fuel are aging and vulnerable to attacks.

While President Joe Biden has been pushing a significant infrastructure bill to improve some of these issues, he issued a moratorium on new oil pipelines via executive order shortly after he took office. Under the executive order, the construction of the Keystone XL pipeline from Canada into the U.S. was halted, as were other new pipelines.

Biden and other environmental activists oppose pipelines because they are used to transport fossil fuels which release carbon emissions. But this shortsighted outlook on pipelines ignores that they are the most efficient and safest way to transport fuel — both when it comes to preventing leaks and keeping workers safe. Trucks and tankers are worse than pipelines when it comes to the emissions required to bring the petroleum to market, and freight trains can be derailed.

Additionally, there are no existing alternative fuel sources that can reliably power the country. Neither wind nor solar power has the efficiency needed to power the country and mega batteries (which can harm the environment themselves) do not yet exist.

The proliferation of electric vehicles has been slow and electric commuter airplanes do not exist. Even if they did, most of the U.S. power grid is powered by fossil fuels. Only nuclear energy has the efficiency needed to power entire cities, but that has been widely opposed by–guess who–environmentalists, who fear the accumulation of nuclear waste. This is ironic given nuclear has zero carbon emissions.

Older pipelines like the Colonial Pipeline were built long before cyber hacks were much of a concern. As hackers and malicious governments continue to target the U.S. infrastructure, old pipelines, power grids, water treatment centers, and other outdated technologies are likely to continue to be exploited.