Home  ⁄  Periodic Fables  ⁄  Uncategorized  ⁄  Will Cats Give You Schizophrenia?

Will Cats Give You Schizophrenia? 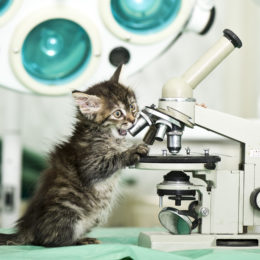 Disproving a hypothesis is an important part of developing scientific knowledge. After all, we can’t all be right all the time.

In the words of science writer Marcus Woo, when a researcher is proven wrong, it means the scientific method is working.

Unfortunately, “negative results,” or experiments that fail to prove what they set out to prove, don’t often make publication. And they grace news headlines even less frequently.

That’s why we’re happy to offer praise where it’s due. According to a study out of the journal Psychological Medicine (and subsequent report in The Washington Post), cat ownership will not make you psychotic.

Or at least cat ownership during pregnancy and early childhood isn’t correlated with psychotic episodes at age 18, which tend to be predictive of later psychoses.

The study followed revelations that schizophrenic patients are three times more likely to have been infected by T. gondii, a parasite carried by cats. And while the jury is still out as to why the co-occurrence of schizophrenia and previous T. gondii infection were observed, we can be fairly certain that cat ownership is not its direct cause.

The authors offer a tongue-in-cheek conflict-of-interest statement declaring that they all own or have owned cats. They may be crazy cat people, but they’re not crazy.