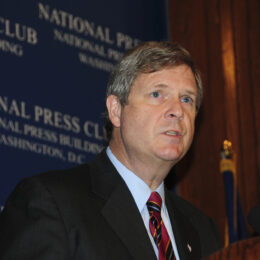 Biden nominated Vilsack, the former governor of Iowa, to return to his post as United States Agriculture Secretary. Vilsack served as agriculture secretary under President Barack Obama. Biden must feel like Vilsack did a good job because he wants him to pick back up where he left off in the cabinet.

Genetically modified crops are also safe and there is no evidence that humans are harmed by consuming modified crops. Reams of studies have been done on GM crops. Moreover, engineered crops can even be modified to be more nutritious than standard crops, such as Vitamin A enriched golden rice.

Vilsack understood that modified crops are better for the environment and they ensure that the U.S. can continue to feed its expanding population.

This unfounded hatred of GM crops is not only misleading, but it is dangerous. Opposition to GM technology has led to children suffering overseas and top officials have warned that opposing modified crops could lead to famine for future generations.

There is a reason that both Republicans and Democrats — who seemingly disagree on everything — continue to support the production of modified crops. Vilsack may have other issues with which someone can disagree, but his support for scientifically improved crops shouldn’t be one of them.