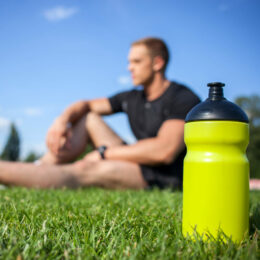 A study from the University of Copenhagen revealed that there may be a lot more in your reusable water bottle than just tap water.

The researchers found that reusable water bottles can shed “several hundred different chemical substances” into the water. The study specifically analyzed water that had been left in squeezable, soft-sided water bottles commonly used by athletes for more than 24 hours.

Jan H. Christensen, Professor of Environmental Analytical Chemistry at the University of Copenhagen’s Department of Plant and Environmental Sciences, said he was shocked to find that at least 400 different substances had leached into the water from the plastic bottle and an additional 3,500 substances could be traced back to the dish soap used to clean the bottle between uses.

“We were taken aback by the large amount of chemical substances we found in water after 24 hours in the bottles. There were hundreds of substances in the water — including substances never before found in plastic, as well as substances that are potentially harmful to health. After a dishwasher cycle, there were several thousand,” Christensen said.

Christensen’s team found several concerning chemicals, including Diethyltoluamide, the mosquito repellent commonly referred to as DEET. His colleague, Selina Tisler of the Department of Plant and Environmental Sciences, noted that the team believes most of the chemical leaching takes place because of the wear on the bottle during washing.

“The problem is that we just don’t know. And in principle, it isn’t all that great to be drinking soap residues or other chemicals,” she added.

Reusable water bottles, if not properly cleaned, can also harbor “biofilm,” a plaque-like sludge that can grow inside lids or other parts of the bottle if it is not properly washed. Biofilm is known to contain many harmful pathogens that can leave thirsty consumers ill.