This year, the U.S. Environmental Protection Agency is preparing to finalize new regulations tightening air quality standards for major pollutants like ozone. One of the main reasons why the EPA says we need these new rules is to reduce the number of cases of asthma. But are air pollution and asthma linked?

Let’s look at the numbers.

Here’s a chart from the EPA showing that ozone rates have fallen by 33 percent since 1980. 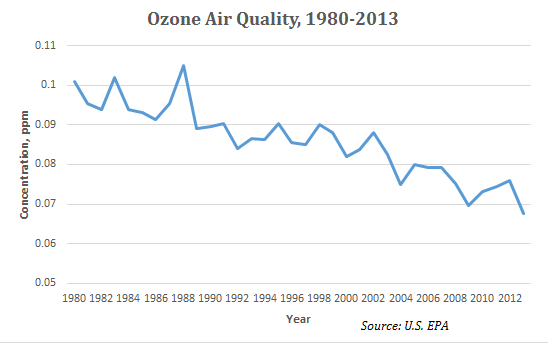 The U.S. Centers for Disease Control and Prevention National Center for Health Statistics has collected data on asthma since 1980, though in 1997 it changed its methodology. While data collected earlier can’t be accurately compared to rates since 2001, the CDC says “Asthma prevalence rates among children remain at historically high levels following dramatic increases from 1980 until the late 1990s.”

In fact, developed countries began seeing a giant uptick in asthma cases in the 1980s—just as air quality started to improve. So will more stringent air regulations help bring those asthma rates down?

Maybe. Our understanding of the underlying factors that cause asthma is changing—as more research on asthma is done, the more complex its causes seem. Among the theories of asthma causes:

Rather than outdoor pollutants, indoor air pollutants have been identified as a likely culprit behind increased asthma rates. As allergist William E. Walsh, MD, FACC explains: “Fifty years ago we lived in old, drafty houses, and the breeze dried and freshened the air, and cleared out mold and other allergens. Nowadays, our super-insulated houses don’t breathe adequately. Making basements into a living space increases mold exposure because mold grows in any basement.”

A recent paper by researchers with Johns Hopkins Children’s Center suggested indoor air pollution, including secondhand smoke, rodents, mold, etc. is a risk factor for asthma. After studying over 23,000 U.S. children, the paper found no statistically significant difference in asthma rates between those who live in inner-city neighborhoods (exposed to higher levels of outdoor air pollution) and those who do not. Researchers found the greatest risk factor for developing childhood asthma is poverty.

In a research paper, The National Asthma Institute of Australia in conjunction with the Australian Government Department of Health and Ageing points out that “air pollution is often mistakenly thought to be a major environmental problem and a possible explanation for the high prevalence of asthma in Australia.”

There’s still so much we don’t know about the causes of asthma. But from what we do know, it seems unlikely dramatically reducing ozone levels will have an appreciable impact on new cases of asthma.

While 2022 brought a lot of good news in many ways, America’s tap water supply continued to present issues throughout the country. According to the CDC,

As Halloween approaches, Americans can expect to see a lot of people walking around in masks, pretending to be someone they aren’t.  It’s not all

The city council in South Lake Tahoe, California, is considering banning the sale of plastic bottled water.  If the ban takes place, flavored drinks and

The Environment Protection Agency finally announced its latest rule regulating the “forever chemicals” known as PFAS. PFAS – or per-and-polyfluoroalkyl substances – is a group